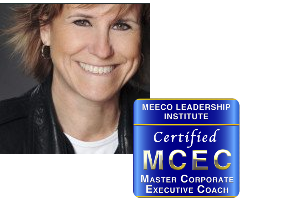 Anne Choquette started her coaching career in 2004, and in 2008, obtained her International Coach Federation credentials as Professional Certified Coach (PCC). In 2009, Anne was recruited by Dr. Charles Pellerin, astrophysicist and author of the book « How NASA Builds Teams, » to join his team of seven 4-D coaches servicing NASA professionals, scientists and managers. She recently co-created an ICF continuing education program (24 CCEUs) designed to certify 4-D coaches. Anne counts more than 2500 hours of coaching with entrepreneurs, executives of Canadian, US, French and Chinese multinational corporations. Furthermore, she is a coach-leader and coach-mentor supervising future coaches on behalf of the coaching school Coaching de gestion. She co-led one of the breakout sessions at the ICF Annual Conference in Las Vegas, in September, as well as another one at the European Mentoring and Coaching Council held in Paris in November 2011.
She completed a second ACTP training with Asia Coaching Company in Shanghai and Beijing. Her mentor and teacher is Dr. Paul Jeong. She is highly interested by the challenge of building corporate cultures that integrate the wisdom of the East and the drive of the West. She focuses mainly on leadership development of leaders and their teams.

Anne has coached more than 195 NASA Professionals and Managers – 4-D leadership program and she has been a Coach-Mentor for International 4-D Network Members (Korea, China, Japan and India). She has lead an International Breakout Session co-leader for the Annual Convention of ICF and EMCC in 2011 and been a guest-trainer in Beijing in January 2011 (50 participants including 33 Chinese, 15 Koreans, one New-Zealander and one German) and she has been a guest-coach leader assisting a reorganization and team building operation (Hong Kong).